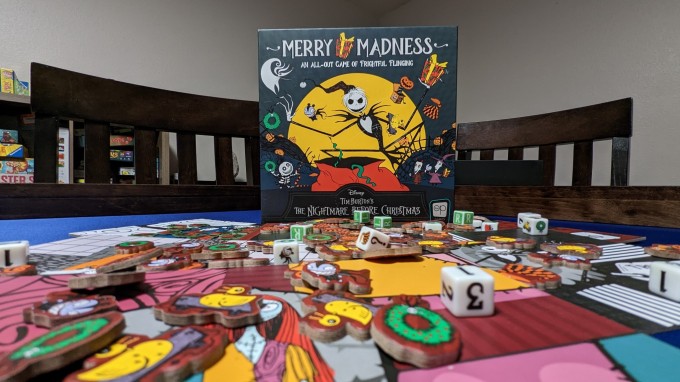 This Halloween season we were gifted Merry Madness by The Op to review. This game follows the same gameplay style of Mickey and Friends: Food Fight and National Parks: Get Wild also by The Op, in a fun all-at-once roll-and-toss game. What then, makes Merry Madness, a different game? It is more in the storytelling than gameplay. The main idea in this game is that Jack Skellington wants you to assemble toys and place them in Sandy Claws’ Christmas Bag. However, the players do not follow Jack’s instructions and instead send the toys around other player’s boards. This is definitely reminiscent of the attitudes of Lock, Shock, and Barrel especially. Whoever clears their Workbench first will be chosen by Jack to accompany Sandy Claws in his sleigh.

Set up for this game is exactly like Mickey and Friends: Food Fight, which is nice in that we didn’t have to learn anything very new which allowed for a quicker immersion into the Nightmare Before Christmas theme. Especially around Halloween, it is nice to have a game with such an easy setup that fits a holiday. What is nice about this game is that it also would be holiday themed for Christmas. To set up, each player chooses a player board called a Workbench and places it in front of them. The Workbenches all have different characters in back: The Mayor, Jack Skellington, Lock Shock and Barrel, Sally, and Zero. Each character has a wishlist with a different toy in the front. These Workbench choices are completely aesthetic as no character has a benefit over the other. This is a dexterity game that is equal for all characters. Sandy Claws’ Christmas Bag then goes in the center of the player boards, within easy reach of all players. Players will fill their Workbench with a certain amount of toys depending on player count, the type of toys doesn’t matter and should be varied. Players also get three dice each. One of the die depicts a different Christmas Toy on each side (Pumpkin-in-a-box, Zombie Duck, Christmas Wreath, Vampire Teddy, Snake, or Player’s Choice), these will be the specific toys on your board that you will toss elsewhere. Then there is a directional die (left right, Sandy’s Christmas Bag, or Player’s Choice) which is the direction in which you will toss a toy on your board. Lastly is the quantity die, which tells you if you are throwing 1,2, or 3 of that specific toy. So if you roll a Christmas Wreath, Left, and 3 die, you will toss three Christmas Wreaths to the Workbench on the left. If you don’t have three Christmas Wreaths, you can just toss up to three. If you don’t have any of what is listed, just keep rolling! You want to clear your Workbench before the other players. If you roll the direcitonal die and get Player’s Choice, our only strategy recommendation is to never send it to the center board (Sandy’s Christmas Bag) because you want your main goal to be to make it harder for other actual players to clear their board, so toss those toys to whoever is closest to winning!

The game plays in multiple rounds until one player receives three Ghoulish Gifts, which are awarded at the end of the round when you clear your Workbench before anyone else. This means that gameplay length can vary, but we found this game to go by very quickly. Rounds start with one player announcing, “1,2,3, What’s This?” as an ode to the movie. Once this phrase is uttered, all players roll their three dice all at once. For each roll, players want to quickly toss x amount of toys in x direction and then roll again many, many times. It is most important to not have long pauses between rolls and to be as fast as you can. Players should also make sure the toys are being tossed directly on the target player’s Workbench as much as possible to avoid any confusion. If someone clears their Workbench, they win after saying “This is Halloween!” A Ghoulish Gift is awarded and the round begins anew the same exact way until someone wins three rounds.

An easy variation is also included in the rulebook called Master Toy Maker, which are inverted rules. Instead of trying to clear your Workbench, you are trying to collect as many toys as you can to trick Jack Skellington into thinking you built them all. The set up varies in that you don’t get as many toys to start with, you start with one of each type of toy and then you fill Sandy Claws’ Christmas Bag with all the other toys. You start the round in the exact same way, except whatever you roll is the type/amount/direction for a toy you will collect. For example, if a player were to roll Snake, Sandy Claws’ Christmas Bag, and 3, they would take three Snakes out of the center board. What we liked most about this variation is that it made more use out of the center board. The round is over as soon as there are no more toys in Sandy Claws’ Christmas Bag. At this point, players will count every set of toy sand get a Ghoulish Gift for each set. A set is made up of five unique toys. The first to three is the winner, just like in the original version, except you can win multiple Ghoulish Gifts in a round with this variation.

There is a second variation called Making Christmas Toys. This set up is exactly the same as the original except you start with all the types of Christmas Toys except what is listed on your Workbench wishlist. The amount of toys you have on your board depends on player count with an amount that also goes in Sandy Claws’ Christmas Bag. Your goal in this game is to have your Workbench only have the toy type from your Wishlist and none of the other toys. It doesn’t matter if your Workbench has only one or has five of that Wishlist toy, as long as it doesn’t have any other type of toy. When you roll your dice in this variant mode, you are both taking and receiving toys. If it is your wishlist toy, you are taking x amount from the location listed. If it is not your wishlist toy, you are tossing x amount of that toy to the location listed to try and get rid of it. This mode requires a kind of brain switch where you have to actively remember when you are giving a toy away and when you are grabbing a toy for your Workbench, which is harder than it seems! Whoever manages to collect their Wishlist toy and gets rid of all the other types of toys from their Workbench ends the round by saying “Seriously Spooky” and will get a Ghoulish Gift scoring token. Just like in the original version, you can only get one round token per round in this version. Again, the first person to win three rounds, wins the game.

The last adjustment they recommend is for young kids to play without the quantity die, so that they can just toss all of the toys of that type. It doesn’t mention this in this game, but another modification that we’ve done is giving kids less starting pieces to move from their board. This game offers many options to keep the fast paced excitement of this game interesting and fair for all players which we appreciated.

Language Barrier Playability: Fantastic. Once the rules are explained, no language needed. This game relies mostly on pictures and symbols which make it easy to play with multiple languages or no language at all.

Replayability: Very replayable. Especially with the variations that are included. We like to switch up the goal between rounds sometimes, which may skew the chances of someone winning sooner, but is just for fun for us.

Artwork: Wonderful. Rich, dark artwork that is exact to the Nightmare Before Christmas universe. The pieces of course are the same design as the movie, but the Workbenches really show off the artist’s creativity in applying those designs to a board game specifically.

Quality: Great. The pieces are thick, durable, and well put together. The dice are small but well balanced, easy to roll. This game looks like it will last a long time.

Strategy: Light. The most strategy is in trying to give a player who is about to win some toys to make it harder for them. Besides that it is really just rolling dice faster and being quick about collecting or getting rid of pieces depending on which style you’re playing.

Organization: Good. Everything fits in the center of the box and doesn’t have any compartments. It does have bags for the Toys and dice, which is all that is needed really. 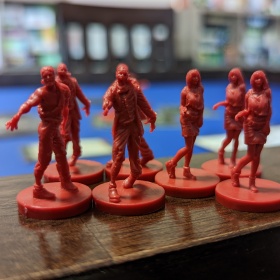 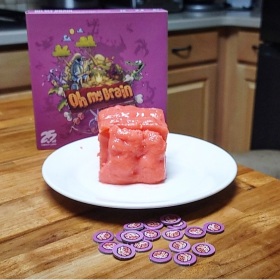 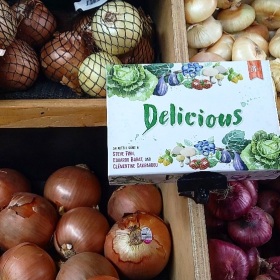 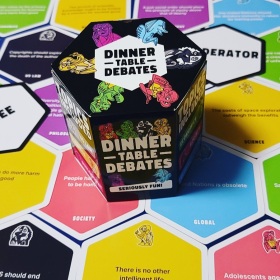 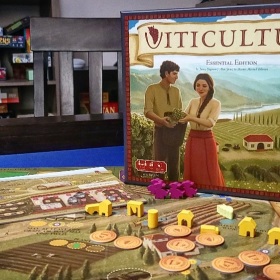 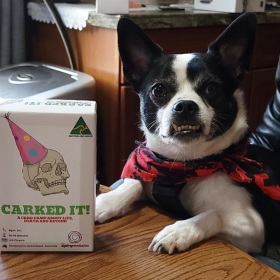 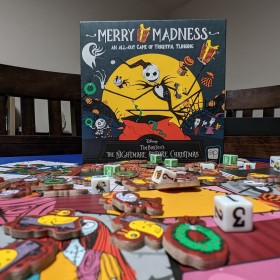 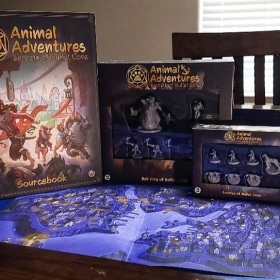